Welcome back for part two of our project ranking every Wrestlemania from 1-31. If you missed part one of the series, you can check it out here.

As a reminder, these rankings are based on scores in these categories:

-Matches– How good were the best matches? All-time great matches or an unusually high number of very good matches are ways to earn additional points.

-Storylines- Includes quality of the storylines building up to the event and coming out of it. Main event storylines get most weight.

-Filler- How bad were the worst parts of the show? Can include both wrestling and non-wrestling elements.

-History – Outside of the importance within the wrestling narratives, how much impact did the show have on the history of the company or the business?

Now that you know the background, let’s get to the rankings for the 11-20th best Wrestlemanias of all time.

Despite significant star power, Wrestlemania XXV was a year of disappointing main events. The first Undertaker-Shawn Michaels match stole the show in the middle of the card. Unfortunately, HHH-Randy Orton and the triple threat between John Cena, Edge, and Big Show were both sorely disappointing. Even lower on the card, the grudge match between the Hardys and Chris Jericho against a cavalcade of legends both felt underwhelming. Oh, and Kid Rock performed for 10 minutes before Santina Marella won the only women’s match.

From 2011-2012, WWE underwent a bit of an identity crisis, which was abundantly clear in the booking of Wrestlemania XXVIII. Was the company going to revolve around hulking superheroes, like John Cena, The Rock, HHH, and Undertaker? Or were relatable, technical wrestlers like CM Punk, Chris Jericho, and Daniel Bryan the future of wrestling? We got part of an answer when Sheamus Brogue Kicked Bryan out of the World Heavyweight Title seconds into the match. We got more information when the excellent Punk-Jericho match went on before the blown up Rock in a cartoony main event with Cena. It wasn’t a bad show, but it had the potential to be much better.

How is it possible that a card featuring Bret and Owen Hart and the Shawn Michaels-Razor Ramon ladder match got only an average overall score? The answer lies in the rest of the card, which was pumped full of more filler than McDonalds “hamburger.” Randy Savage wrestled Crush in a forgettable no DQ match. The ill-begotten Men on a Mission defended the Tag Team Titles against the Quebecers. Yokozuna wrestled two matches for a second Wrestlemania in a row. And those were some of the more enjoyable moments.

When I finished scoring every Wrestlemania, I calculated that the average overall score was about 30.7. That means we are now squarely in the range of “average” Wrestlemanias, and there is no better way to describe Wretlemania XXI. HHH vs. Batista and Cena vs. JBL in the main events? Not great, not bad, perfectly average. Kurt Angle vs. Shawn Michaels as an elite midcard match was perfectly counterbalanced by Akebono sumo wrestling Big Show. I enjoyed the first Money in the Bank match as much as anyone, as well as the “Wrestlemania Goes Hollywood” vignettes throughout the show, but nothing jumps out as exceptional one way or the other.

In the middle of one of the company’s best runs ever, Wrestlemania XVI stands out as a missed opportunity. The “McMahon in Every Corner” main event had a great deal of star power (HHH, The Rock, Big Show, Mick Foley) for a match that hardly fits in the pantheon of great main events. The undercard stood out with the Dudleys-Hardys-Edge & Christian triangle ladder match that would give birth to the TLC series. A triple threat between Kurt Angle, Chris Benoit, and Chris Jericho was another very good mid-card match.

This seminal event at Toronto’s Skydome was full of great matchups that produced mediocre matches. Hulk Hogan vs. the Ultimate Warrior was a main event that was supposed to define an era, but instead sticks out as a misstep that set WWE back about five years. The show also featured Andre the Giant, Mr. Perfect’s first WWE loss, Dusty Rhodes vs. Randy Savage, Ted Dibiase vs. Jake Roberts, the Rockers and Roddy Piper. If you’re wondering why that card didn’t fall higher on this list, ask yourself which of those matches was great, historic, or memorable.

Unlike several of the events that surround it, Wrestlemania XXIII was short on narrative and long on match quality. An unanticipated HHH injury led to the best match of Cena’s career to that point against Michaels. The Undertaker launched a late career resurgence against Batista and Money in the Bank took a step forward in its third year. WWE used Ford Field very well, including a memorable Mustang-themed Cena entrance.  Donald Trump’s appearance in the Battle of the Billionaires was even a fun way to include a celebrity.

While the popularity had not yet crested, Wrestlemania XIV represented the height of the Attitude Era in many respects. Austin beating Michaels for the WWE Title with the assistance of Mike Tyson was a decent match with tremendous historical importance. The rest of the card was peppered with matches that would echo through the company’s biggest run: Undertaker vs. Kane, Ken Shamrock vs. The Rock, HHH vs. Owen Hart, and the New Age Outlaws vs. Mick Foley and Terry “Chainsaw Charlie” Funk. 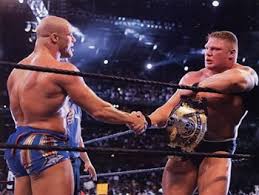 If Wrestlemania XIV was the Attitude Era launch party, then XIX was the symbolic sendoff. The final Austin-Rock match of their trilogy was also the last of Austin’s career. Before Lesnar botched his Shooting Star Press, his match against Kurt Angle was terrific. Michaels and Jericho also had a memorable match in the middle of the card. If not for uneventful nights for HHH and the Undertaker, this event could have ranked higher.

Why does the second Rock-Cena Wrestlemania rank ahead of the first? Almost every other element of the show exceeded its predecessor. CM Punk wrestled the best match of his Wrestlemania career against the Undertaker, and HHH and Brock Lesnar had a memorable clash of their own. This year also featured The Shield and Team Hell No in rare Wrestlemania appearances. An outdoor event near New York City in April was a risk, but the site paid off as distinctive and memorable.