Countries with a Single WWE Titleholder

UncategorizedComments Off on Countries with a Single WWE Titleholder

Since the founding of the WWE, there have been 243 different American-born wrestlers who have held WWE titles. On the other end of the spectrum, there are 19 countries that have sent a single wrestler to WWE to win a belt. These countries will likely never catch up with wrestling hotbeds like Canada (42), Japan (11), or Mexico (a surprisingly low 3), but they will be forever enshrined in the history books for producing wrestlers who would wear the gold.

Not only did Volkoff win the Tag Team Titles with the Iron Sheik, he did so at the inaugural Wrestlemania. Volkoff was born in Croatia (which was part of Yugoslavia at the time), but wrestled at a time when all of Eastern Europe fell under the broad heading of “Soviet Russia.” At least he was from Europe, whereas his partner in the Bolsheviks, Boris Zukhov, was born in Roanoke, Virginia. Perhaps that’s why he and the Sheik were so much more successful.

Petersen was part of the Fabulous Moolah’s cadre of women wrestlers brought into the WWF when Vince McMahon took the promotion national. She was half of the Women’s Tag Team Champions, but won and lost the titles without a match taking place. She and Velvet McIntyre were awarded the titles initially and lost them to Leilani Kai and Judy Martin in a fictitious match. She won and lost a title that most fans never knew existed, yet she remains the wrestling pride of Denmark.

Later known as Sim Snuka in a brief flirtation with Legacy, Deuce did what his father Jimmy Snuka could not do- win a WWE title. He and Cliff “Domino” Compton held the Smackdown version of the Tag Team Titles when they were particularly watered down due to the brand split. They won the titles from Paul London and Brian Kendrick and eventually lost them to the feuding Matt Hardy and MVP- not exactly the Road Warriors or the Midnight Express. What is more entertaining that Deuce’s actual home of Fiji is his team’s billed hometown of “The Other Side of the Tracks.”

Anyone who has watched Wrestlemania III enough times will always remember that Andre hails from “Grenoble, in the French Alps.” Although his WWF Title win over Hulk Hogan was vacated due to the dueling Hebners referee controversy, he and Haku later won the Tag Team Titles without controversy. While belts never defined Andre, it’s appropriate that he is at least on the list.

Sadly, Jamaica has never had a champion in WWE and Kingston’s short-lived gimmick is as close as it gets. Believe it or not, Kingston has held WWE gold on ten different occasions. Put another way, that’s seven more than Randy Savage. 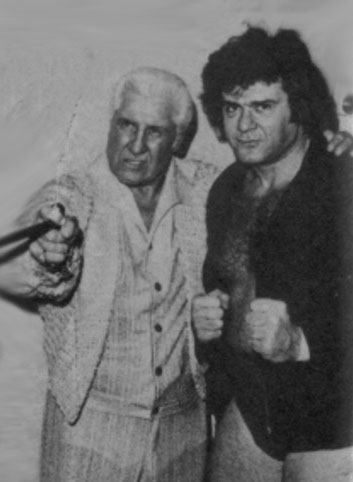 There are conflicting reports as to whether Arion was born in Greece or Egypt. What is clear is that he embraced the former, wrestling under the moniker “The Golden Greek.” He and Bruno Sammartino formed and ethnic good guy superteam (the whole Pelopennisian War in one ring!) in the 1960s and won the U.S. Tag Team Titles. He won the same belt two more times with different partners before he turned heel under Freddie Blassie and had a successful singles run in the main event.

Jackson’s Guyanese heritage made him unique in WWE, but it also made him almost incomprehensible on the mic. Without the ability to speak and a limited ability to wrestle, the impressive specimen’s run as Intercontinental Champion did not last. Perhaps he will now become the first Guyanese champion in Lucha Underground.

I think we can all understand why WWE would want a foothold in an enormous Indian entertainment market, though it is too bad that Khali’s stiff, arthritic frame had to carry those hopes. He won the World Heavyweight Title in a battle royal after an extended un-pinned run, but went on to function more as a sack of potatoes for other wrestlers to throw around.

Iron Sheik has had one of the most impressive careers of anyone ever involved in wrestling. He was a bodyguard for the Shah of Iran, an Olympic wrestler, a coach for the U.S. Olympic team, and a prodigious snorter of cocaine. He trained to become a professional wrestler and won titles in territories all over the country. He won the Tag Team Titles with Nikolai Volkoff at the first Wrestlemania and later resurrected his career alongside the heel Sergeant Slaughter. He has even become one of the most entertaining personalities on all of Twitter. His transitional championship between Bob Backlund and Hulk Hogan might be his most famous moment, but it is a blip on the radar of his incredible career.

Before he beat Andre the Giant in Baghdad, became one of the most famous managers in the AWA as Sheik Adnan El Kaissey, and teamed with Sergeant Slaughter as General Adnan, he won the WWF Tag Team Titles. Oddly enough, he worked a gimmick as a Native American named Billy White Wolf at the time alongside Chief Jay Strongbow.

Malta – Baron Mikel Scicluna
Scicluna was one of the trademark heels of Vince McMahon Sr.’s WWWF. He won the U.S. Tag Team Titles with Smasher Sloan (not his given name) and the World Tag Team Titles with King Curtis Iaukea. He was also a constant threat to Bruno Sammartino and Pedro Morales during their lengthy title reigns.

Before he became a well-known road agent for WWE, Garea won five WWF Tag Team Titles with four partners. His first win was as the mechanic in a team with Haystacks Calhoun, and he won subsequent titles with Dean Ho, Larry Zbyszko, and Rick Martel. Garea stands out on this list as one of the few wrestlers whose nationality was not an essential part of his gimmick.

While Ireland has had three champions in WWE, Northern Ireland has only had one. Although Finlay spent his best American years in WCW (and won the TV Title there), his greatest singles accomplishment was winning the U.S. Title from Lashley while a member of King Booker’s Court. Like Garea, Finlay went on to become a successful agent for WWE after his in-ring career.

Along with “The Golden Greek” Spiros Arion and “The Swiss Superman” Cesaro, “Polish Power” is one of the few international champions to have his nationality branded into his nickname. Putski and Tito Santana won the Tag Team Titles to bring the only WWF/E belt to the country that birthed Stanislaus and Wladek Zbyszko. Putski had an outrageously muscular physique that was before its time. He passed that physique on to his son Scott, who did not achieve the same level of success.

The Darewolf managed to win three Tag Team Titles during his time with the Nexus as a partner to Heath Slater. His nationality became more of a focal point after the Nexus and the Corre disbanded and he became a singles wrestler. The branding did little for him, though, as he steadily slid down the card to jobber status before he left WWE.

As the son of an Air Force officer, Glenn Jacobs is the surprising answer to the trivia question about WWE Champions from Spain. His family moved to the United States and he played football and basketball in Missouri, so it is not as if his identity has much to do with the Iberian Peninsula. While he has held 18 WWE Titles, he also has had his share of ignominy- he was a participant in the Wrestling Observer’s Worst Feud of the Year seven times in an 11 year stretch.

After he achieved great success on the U.S. independent circuit, Cesaro quickly won the U.S. Title when he came to WWE and recent added the Tag Team Titles to his C.V. Cesaro stands out because he’s not only the most successful Swiss professional wrestler, he is one of very few to gain any notoriety whatsoever.

The one-time WWF Tag Team Champion (with Andre the Giant) will go down in history for his toughness far more than his championship resume. Haku is said to have bit a fan’s nose off in a bar fight, gouged out the eye of another wrestler in the lockerroom, and snapped a man’s front teeth out of his mouth with his fingers. As Jake Roberts recounted in an interview, “If I had a gun and was sitting inside a tank with one shell left and Meng is 300 yards away, he’s mine, right? Well the first thing I’m going to do is jump out of the tank and shoot myself because I don’t want to wound that son of a bitch and have him pissed off at me.”

Last and absolutely least, Kozlov and Santino Marella disgraced the Tag Team Titles in 2010. Kozlov was another in a long line of huge men with athletic ability who ended up in the spotlight before they learned how to wrestle or talk. Even so, he has brought Ukraine into a tie with the likes of France and India on the list of most WWE titleholders.